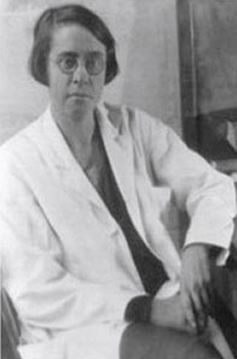 Born to a family of wealthy Bostonians, Katherine Dodd (1895-1965) was educated at Bryn Mawr College, and received her M.D. from Johns Hopkins in 1921. After serving a residency, she spent nine months in Bulzulnek, USSR, assisting at a Quaker clinic for child welfare and famine relief.

In 1926, Dr. Dodd was recruited by Canby Robinson for Vanderbilt's Department of Pediatrics, where she remained for the next eighteen years. She quickly acquired a reputation as an outstanding clinician and researcher, and was highly popular with students. However, she was eventually passed over for the Department's chairmanship. In 1944, she left Vanderbilt to accept a position at Cincinnati's Children's Hospital Research Foundation. Later, Dr. Dodd served as Professor of Pediatrics at the University of Arkansas, the university of Louisville, and Emory University.

In the summer of 1947, she was a member of a team sent by the US Public Health Service to Japan. The team succeeded in its mission of investigating the cause and treatment of ekiri, a highly fatal disease prevalent among Japanese children.

Her later years were marked by numerous awards and honors. She was Kentucky's "Woman Physician of the Year" in 1958, and later received the Elizabeth Blackwell Award for her accomplishments as a "Physician, Investigator, and Teacher in Pediatrics." On the 75th anniversary of Bryn Mawr College, Dr. Dodd was honored as one of its most outstanding alumnae.

Back to the Office of Faculty Development