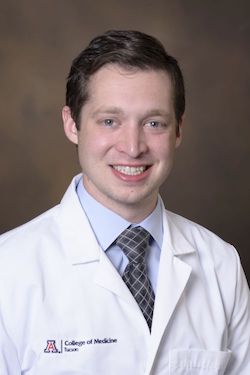 Tyler is a native of Tucson, Arizona where his large family (read: 37 members and growing) still resides. Nashville is the only place outside of the desert that he’s called home, and he is beyond excited to be part of the Vanderbilt family. Tyler attended The University of Arizona where he received his B.S. in Chemistry and his M.D. While this is his first big move, Tyler enjoys traveling to see friends around the country and spent two summers of his undergrad in southern India. In his spare time, he enjoys binging Netflix, singing, rock climbing, playing board games, and eating ice cream (his family owns several Dairy Queens in AZ, so he sometimes refers to himself as the “Dairy Prince”). Tyler’s main passion, in and out of medicine, is advocating for children with developmental disabilities and he plans to devote much of his career to improving care for all members of the disability community.