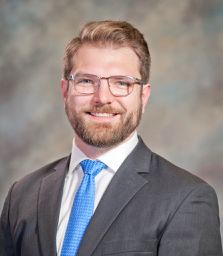 Jacob was born and raised in Portland, Tennessee, a small town about 45 minutes north of Nashville. He attended Middle Tennessee State University where he obtained bachelor’s degrees in Mathematics and General Science. He remained in Tennessee for his medical education attending the University of Tennessee Health Science Center (UTHSC) College of Medicine in Memphis. Always very interested in science, Jacob conducted two years of independent laboratory research on the immune system and leukemia at St. Jude Children’s Research Hospital in between his 2nd and 3rd years of medical school under the support of the Howard Hughes Medical Institute and their Medical Research Fellows program. He is currently interested in pursuing a physician-scientist’s career as a pediatric hematologist/oncologist.

Outside of medicine and science, Jacob is an avid player of his beloved guitars. Even more than the guitars, however, he enjoys watching his daughter grow and spending time with her mother, his fiancé.